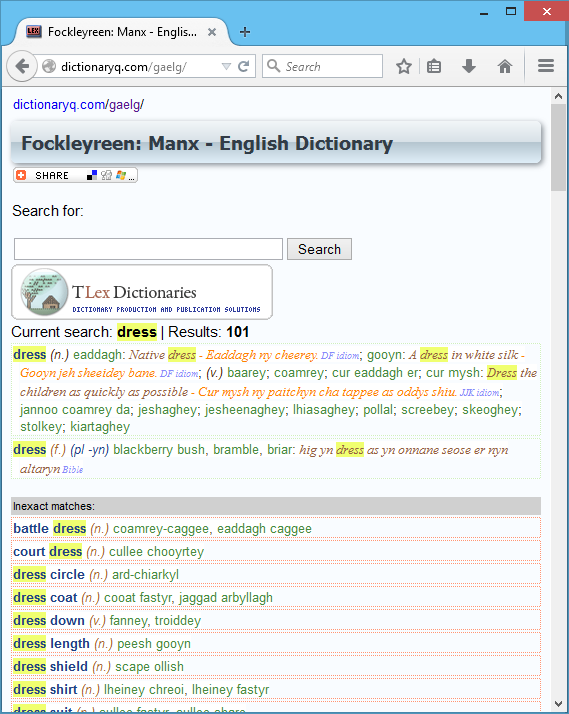 The dictionary features 130,000 entries, over 24,800 usage examples, and is also mobile-friendly.

The dictionary is being edited in TLex, and the data is also available for download in TLex format (which can a.o. be used with tlReader) at: http://tshwanedje.com/downloads/files/ (this is the same dictionary currently housed at http://homepages.manx.net/gaelg/).
Posted by tshwanedje at 10:49 AM 2 comments: 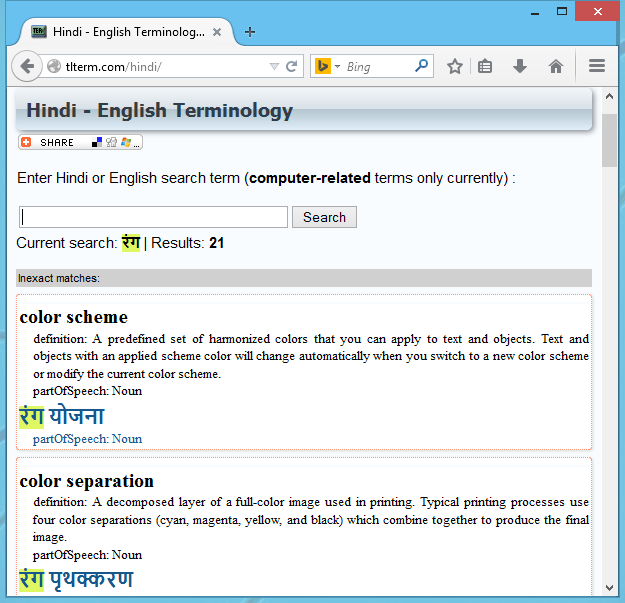 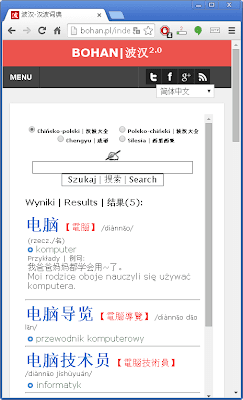 Another "made with TLex" dictionary:

"The biggest and the fastest developing Polish-Chinese and Chinese-Polish Dictionary" - this dictionary contains over 55,000 entries.

The online dictionary user interface, created by Bohan, features site localization (the website is available in Polish, Chinese and English), smart "responsive" web page design for mobile, auto-suggest, Chinese character animations, the ability to be embedded in other websites, and more.

Bohan, located in Poland, are a reseller of TshwaneDJe software, and also offer publishing services, translation and localization services, consulting in relation with website design and creation, and general services and support in relation with the TLex dictionary editing software. 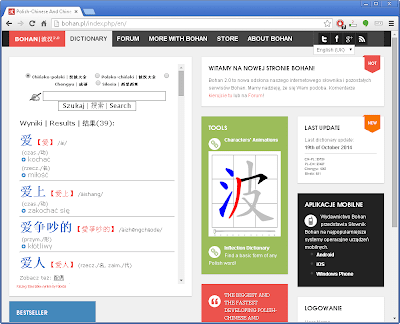 We've published new searchable versions of the Microsoft Terminology lists for many languages: 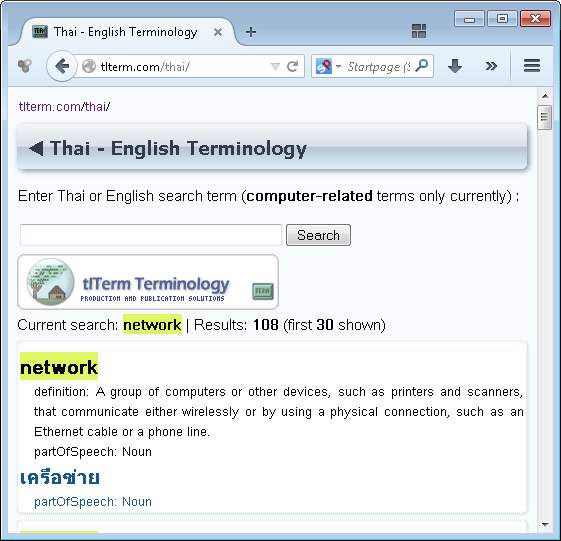 We plan to supplement these searchable terminology lists with more languages and more terminology data in future (and plan to possibly allow TLex and tlTerm users to easily publish their own data here too).

These terminology lists are published using TLex Online - contact us if you want to publish any reference works using this customizable and flexible platform.
Posted by tshwanedje at 7:01 AM 2 comments:

We have extended automatic free upgrades for all users of the following products through to at least 'version 2016':
• TLex Suite
• tlTerm
• tlCorpus
• tlDatabase

This means that if you own a license for any of these products, you will be able to upgrade to the latest version through 2015 and 2016 (as these future versions become available - note, the current version remains 'version 2013'). (You can upgrade to the latest at any time by using the "Help / Check for updates" menu command, then following the instructions. New features and improvements are integrated into the latest updates continually.)

These free upgrades apply to all users of these software products, including those going all the way back to the early 2003 versions of TshwaneLex (now TLex Suite). Your existing 9-digit License Number should continue to "just work" for activating the latest version (provided it is for the right product line).

(If you have lost your activation details, you may be able to retrieve them via this link if you still have the same email address - or alternatively, contact us if you need assistance recovering old activation details.)

Posted by tshwanedje at 6:30 AM No comments:

Over 4300 entries from the Microsoft Swahili terminology list have been added to our Online Swahili Dictionary: http://africanlanguages.com/swahili/ 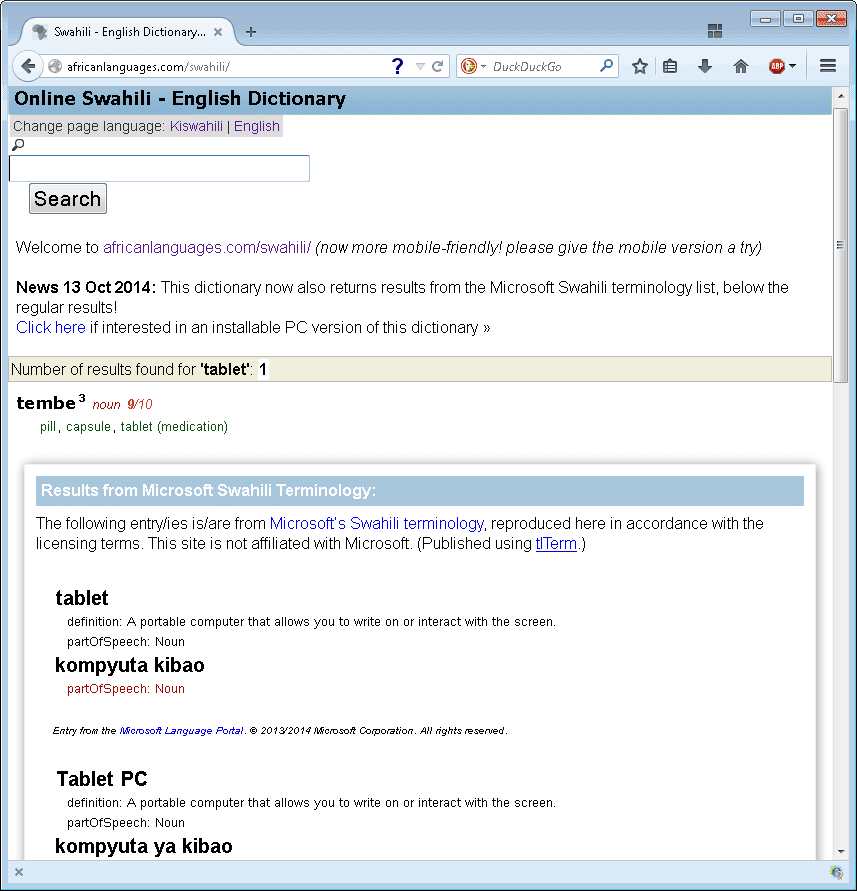 These results are displayed below the regular results.
Posted by tshwanedje at 8:45 AM 1 comment:

We've upgraded several more of our 'TLex Online'-based online dictionaries with improvements that make them easier to use on mobile devices. The improved dictionaries include Chinese, Esperanto, Jarai, Northern Sotho (in addition to Swahili, previously done), Kalenjin and more. There are also some new functionality improvements,  e.g. an option that allows dictionary end-users to search for words that appear within results by clicking on them, making it easy for the user to explore related words/entries.

The mobile-friendliness improvements are also being implemented in other TLex-based dictionary websites, such as the Longman-HAT language portal (along with many other improvements and additions to the TLex Online 'platform'). 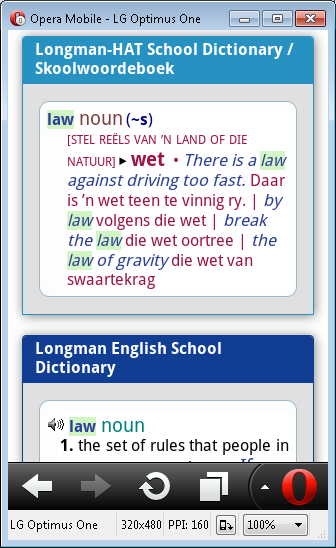 Posted by tshwanedje at 6:00 AM No comments:

TLex and the "Handwoordeboek van die Afrikaanse Taal" 'in the news'

A complimentary mention of our TLex (TshwaneLex) software in the news, in use for the new HAT dictionary (Handwoordeboek van die Afrikaanse Taal):

Posted by tshwanedje at 10:00 PM No comments:

We are pleased to announce another new "made with TLex" dictionary:

Posted by tshwanedje at 2:33 AM No comments:

To users of TLex, tlTerm or tlDatabase using ODBC with PostgreSQL: It is recommended that you upgrade to the latest Windows PostgreSQL ODBC driver:

This driver (version "09_03_03" 17 May 2014) incorporates a fix (that we implemented and submitted to the PostgreSQL developers) for a reliability issue that may occur if you are working on an unreliable network (e.g. periodic network disconnects, or high packet loss).

We also recommend ODBC users upgrade to the very latest version of TLex (or tlTerm etc.), as we have been working on many improvements to make it more robust on unreliable networks.
Posted by tshwanedje at 12:32 AM No comments:

A new tutorial video is available:

For those relatively more advanced users (of TLex) who don't mind trying out the latest ('bleeding-edge') changes, we have some important changes we would like some help testing. We have a 'beta' release line of the Windows version of TLex Suite that includes generally some of the newest changes not yet rolled into our 'official' builds ... these beta releases are linked at the bottom of the TLex Suite download page on our website. The latest beta version (version .1213 or higher) includes a new 'Web layout engine' ('HTML window provider') that we'd like early public testing on (this is the 'Web browser engine' that drives the Preview Area and various other windows within the software). The new Web layout engine is called CEF3 (Chromium Embedded Framework), and it's based on basically the same open source engine underlying the Chrome browser.

This should fix the small-caps display problem if using the wxWebkit option, and the 'invisible cursor' problem some users have if using the Internet Explorer option. It's also a generally more capable 'browser engine' that is going to allow us to add a lot more 'interesting' functionality in the Preview Area and elsewhere in the near future.

If you've installed the new beta version, CEF3 is not yet selected by default, so to test it out, run TLex (or tlTerm), select the menu option 'View / HTML window provider / CEF3', then restart TLex (or tlTerm). Ideally, that should be all you need to do - everything else should then just continue to work 'as is'. Please report any problems to us.

Posted by tshwanedje at 5:17 PM No comments:

We have created another new support resource for our software users, the TshwaneDJe Knowledge Base:

This Knowledge Base has been created using our TLex Online Publishing platform, which allows us to easily add new articles with the 'click to publish' functionality from within TLex, and provides an additional "use case" demonstrating the flexibility of our online publishing platform, i.e. it can be used for more than just dictionary and terminology websites!
Posted by tshwanedje at 10:13 PM 1 comment: