We've released Version 2016 RC1 (Release Candidate 1) of TLex Suite, tlTerm, tlCorpus and tlDatabase. This is a pre-release leading up to a formal Version 2016 release in the near future.

All existing users' licenses will be upgraded to the latest version automatically and for free (existing license numbers can be used to activate either version 2016 or version 2013). (Users currently on version 2013 or earlier are advised to update to version 2016. You do not need to do anything 'special' to upgrade - if you follow the 'usual' instructions for updating, you will automatically receive version 2016 RC on your next update.)

For a detailed list of what's new, please see the changelog: http://tshwanedje.com/support/changelog 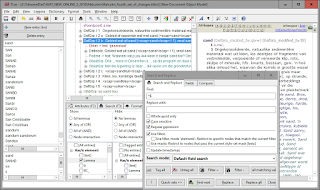 Please contact us if you have any inquiries.
Posted by tshwanedje at 4:14 AM 2 comments:

TshwaneDJe did the website development for the new terminology website of the Stellenbosch University Language Centre, and our tlTerm Terminology Software is also being used to compile the terminology:

The website itself is trilingual and can be used 'in' either English, Afrikaans or isiXhosa.

The system allows new terminology updates to be published to the website continually. The website is based on our TLex Online platform.

From the Language Centre's announcement:


On Monday, 23 November 2015, the isiXhosa portfolio of the Stellenbosch University Language Centre launched its terminology website, with the terms presented in Afrikaans, English and isiXhosa. This site is not only accessible to persons directly connected to Stellenbosch University, but to anyone with access to the internet.

The site is thematically sorted into separate trilingual terminology lists and has an easy-to-use search function. All the lists have been compiled by Pumlani Sibula, who heads up the isiXhosa portfolio at the Language Centre. These lists were created using inputs from many different sources, including staff members of academic faculties at Stellenbosch University.

The development of the site attests to Stellenbosch University’s commitment to contribute to and promote isiXhosa, which is one of the official indigenous languages in the Western Cape, as an academic language. Doing this also creates opportunities to further isiXhosa’s use in general.

This terminology resource assists students, in particular isiXhosa students of Stellenbosch University, in gaining a much better understanding of subject terms in their areas of study. The Language Centre hopes that this will also afford students the opportunity to learn more about these terms – all through their mother tongue.

“The use of isiXhosa will help to build the confidence in the language speakers. It helps to change their attitude towards their language, creates self-awareness, and promotes unity and inclusivity”, notes Pumlani.

The site was developed and designed in collaboration with David Joffe and his team of TshwaneDJe, from which the terminology database tlTerm, used for creating the terminology site, was purchased.

Before the launch of the website, the terminology lists now available on the site were also made available to faculties in printed publications.

Currently there is approximately 6 000 terms available on the site. These terms are sorted into terminology lists covering a number of areas of study, as well as sport:

Numerous additional lists are planned for addition to the site in 2016 and onwards.

Other features of the site include downloading entries as PDF, a trilingual alphabetical browse list, localization, and a "simultaneous feedback" system allowing direct and potentially immediate incorporation of feedback from end users.


For more information about tlTerm, or to download an evaluation version, click here.
Posted by tshwanedje at 5:12 PM 3 comments: